Australia could be joining a trans-Tasman-style free-movement area between Australia, Britain, New Zealand and Canada. According to a report, authored by British Conservative MP and foreign-policy specialist Bob Seely and researchers at the Henry Jackson Society.

The report said Britain should also aspire for a free-trade area that emulated the closeness of the trans-Tasman relationship.

Australia’s High Commissioner to Britain, George Brandis, attended the launch of the report. Speaking to the BBC earlier in the day, he welcomed moves to deepen bilateral ties.

The UK is the second largest source of foreign investment in Australia, with the stock of investment valued at $481.3 billion in 2017 (FDI of $83.2 billion).

Although still at early stages, any further development in the direction post-Brexit could be a major win for Australian small and medium businesses. Particularly those in the agricultural, medical and services space. 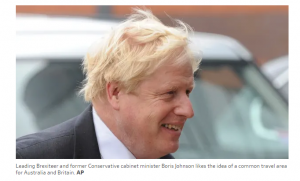 Posted in Uncategorized on 14th February, 2019