The Melbourne office market has been in the spotlight recently as population and commercial growth expands away from the CBD and into suburban areas. In the latest sign of the trend, Macau investors have bought out an office development at Ringwood in Melbourne’s east fully pre-committed to the government for $28.3 million.

The take-out-style transaction was struck on a tight yield of 5.3 per cent, an indicator of the buoyancy in Melbourne’s suburban office markets, where deals completed above $10 million have hit $822.8 million so far this year. Last year the tally was $627.8 million.

The price represents a building rate of more than $8,500 per square metre. The development at 60-62 Maroondah Highway project is pre-leased to the state government on a 12-year term. Bids came from domestic investors and institutions as well as groups from Singapore, Macau and mainland China.

The investment in the Ringwood development is the latest in a run of strong commercial property deals throughout suburban Melbourne this year.

Also in September, prominent businessman and Crown Resorts director Harold Mitchell collected $49 million from the sale of his former South Melbourne headquarters, sold to a local private investor on a yield just above 5 per cent.

Veteran developers Michael Lasky and the Herzog family joined the action In October, selling a historic warehouse in the city’s inner suburbs to a mainland Chinese investor for $37.3 million on a tight yield of 5 per cent.

A move even economic development throughout metropolitan Melbourne is obviously music to our ears and it’s encouraging to see SMEs taking roots in suburban Melbourne and spread job creation and wealth to benefit all Victorians. 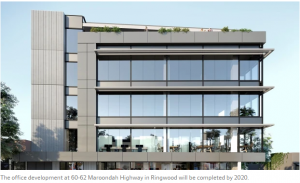 Posted in Uncategorized on 18th December, 2018