In yet another sign of the market’s confidence in the local Melbourne economy, the rush of international luxury brands seeking a bricks-and-mortar presence in the Victorian capital is showing no sign of slowing down in 2019. Among those hunting for retail space on Australia’s east coast are Swiss watchmaker Audemars Piguet, French trunk and leather goods maker Goyard , French luxury jewellery and watches house Boucheron and high-end English footwear manufacturer Church’s , according to well-placed sources.

Australia has a well-developed luxury market with some of the highest density malls in the Asia Pacific region,” explained Mulberry commercial director Ian Earnshaw after the British fashion house relaunched in Australia in partnership with the Luxury Retail Group, opening a flagship store in Emporium Melbourne.

Some of the high-profile examples include Spanish designer brand Balenciaga – part of Kering Group – negotiating to takeover American rival Ralph Lauren’s prime Melbourne store at 181 Collins Street, owned by the Smorgon family. Melbourne’s Li family will also be expecting a similar uplift in the value of its four-level 1950s building at 256 Collins Street, after the heritage facade was restored to accommodate the new flagship store for Swiss watchmaker Longines, which opened in December after more than a six month fitout. Other major openings last year included French luxury house Hermès in Chadstone Shopping Centre, and Fendi new Melbourne flagship below the gentlemen-only Athenaeum Club at 85 Collins Street.

According to industry sources, the trading figure being reported in Melbourne are on par with the likes of Hong Kong and New York. Not only was Australia appealing because of the high number of wealthy people visiting and living here, but because of the relatively unsaturated nature of the market with only 50 per cent of major global brands that have a dedicated Australian website having a bricks-and-mortar presence as well. So there is certainly room for more growth. 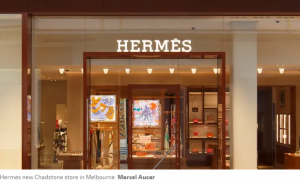 Posted in Uncategorized on 15th January, 2019