Federal Treasurer Josh Frydenberg has delivered a festive-season public message to banks to ensure healthy lending flows to households and small business, in order to avoid a royal commission-induced credit squeeze that could crimp the economy.

Amid concerns that front-line branch staff are becoming more conservative in reaction to the royal commission’s crack down on responsible lending laws, Mr Frydenberg told AFR Weekend he did not want to see an impact from slower credit growth on the real economy.
“While credit growth has slowed, driven particularly by a decline in investor demand, we do not want to see a spillover impact on the real economy,” Mr Frydenberg said.

The banking regulator before Christmas removed restrictions on interest-only and investor home loans, declaring they had “served their purpose of moderating higher-risk lending, and supporting a gradual strengthening of lending standards across the industry over a number of years”.
The previous crackdown by the Australian Prudential Regulation Authority caused interest-only loans to fall to about 20 per cent of major banks’ new home lending, down from a risky 40-50 per cent two years earlier.

Reserve Bank of Australia governor Philip Lowe and Mr Frydenberg have repeatedly expressed concerns about a Hayne royal commission-triggered credit squeeze potentially hurting the economy.
National Australia Bank chief economist Alan Oster said his bank was seeing good growth in lending to business, suggesting it might be other banks who were retreating. NAB is the country’s biggest business bank.
“We also know for November our lending book was really strong,” Mr Oster said. Small business credit growth was about 5 per cent at NAB, he said. 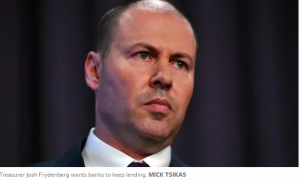 Posted in Uncategorized on 11th January, 2019