Tourism operators are hoping for an extended high period of trade to kick off 2019, thanks to the Lunar New Year beginning just as school holidays end, with China Southern Airlines adding an extra daily flight into Australia to keep up with demand.

China Southern Airlines has added an extra flight to their schedule over the Lunar New Year period to deal with increasing demand from Chinese travellers wanting to visit Australia.

An extra Airbus A380 will ferry passengers to Sydney from Guangzhou, taking the number of daily flights out of the southern Chinese city from two to three per day.

Traditionally, the Lunar New Year period of January to February is one of the busiest times of the year for Chinese tourists. According to Tourism Australia, 24 per cent of all visitors from China ventured to Australia during this period over the last five years, on average. 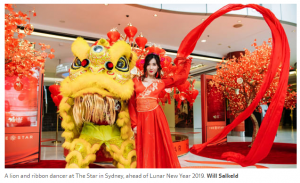 Posted in Uncategorized on 7th February, 2019