The Australian Bureau of Statistics (ABS) released its latest unemployment figures last Thursday. It showed that the key jobless rate fell to 5.3% in July from 5.4% in June, the lowest since November 2012. During the month, 19,300 new full-time jobs were created. Following the release of the data, the Australian dollar rose to US72.7¢. Just as encouragingly, ABS figures also showed that wages were rising throughout the full-time employment spectrum.

Meanwhile, the Reserve Bank of Australia said it now expects the jobless measure to drop to 5% by the end of 2020.

As employment gains momentum, consumption growth usually follows with a 2-3 year lag – when people gain better employment conditions and their wages rise they start to have more disposable income, which tends to drive them to spend more on discretionary items such as restaurants, entertainment and retail shopping, which in turn drive growth in the small-to-medium business sector. First Choice Business Brokers stand ready to facilitate the growth in the next few years. 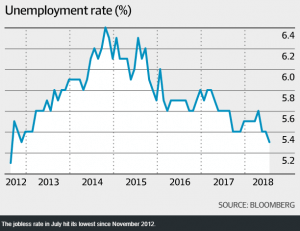 On Wednesday last week the New Zealand government announced a ban on foreigners purchasing homes in a bid to control prices, with the exception for Australians and Singaporeans, thanks to existing free-trade agreements. The new law fulfils a campaign pledge by the liberal-led government which came to power last year.

Statistics indicate that about 3% of New Zealand homes are sold to foreigners, but the amount rises to 5% in the Queenstown region and 22% in central Auckland. Figures released Wednesday by the Real Estate Institute of New Zealand indicate the median house price in Auckland is 835,000 New Zealand dollars ($US547,000) while the median price across the country is $NZ550,000 ($US361,000).

Given the economic, political and cultural closeness of Australia to New Zealand, the decision is expected to divert international capital away from New Zealand and into Australia. Of course there are also similar restrictions imposed on the Australian residential market. That said, the market in Australia is much larger and apart from residential investments, we are also increasingly seeing investments into export-oriented small to medium businesses. The trend looks set to continue as the residential market enters a stabilising trend in the next few years and as the economy integrates further into the global trading community.

New figures released last week showed that deals in retail property over the 2018 financial year hit $9.87 billion across Australia, a record total after increasing almost 50% on the previous year, despite widespread concerns at the broader impacts of increasing e-commerce on bricks and mortar retail. The record year of investment sales represents a 38% increase on the five-year annual average of $7.1 billion, based on Colliers International’s analysis.

Outpacing national growth was Victoria, the state increased sales volumes by a staggering 72%, hitting $2.71 billion in deals, again reflecting the strong retail demand on the back of the highest population growth in the country.

Perhaps little known by most Australians, Australia has the lowest proportion of retail space among the major retail markets, with only 28.9 sq m of retail space per square kilometre of habitable land. In the US, it is 177.5 sq m, with ratio of 50.4 sq m in Canada and 165 sq m in Britain. As the social and economic landscape of Australia converge toward that of its bigger cousins the US, Canada and the UK, retail space density is expected to increase which will provide hotbeds for thousands of retail-focused businesses to prosper. As experts in the field, First Choice Business Brokers can assist our valued clients to capitalise on the positive trend in the future. 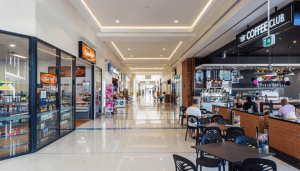 There’s always exciting news in Victoria’s business community. For a confidential discussion about your next business transition telephone First Choice Business Brokers on 9899-1888.

We’d love to hear your opinion and continue the discussion. Please contact lee@firstchoicebb.com.au or 0405 459 528 to discuss.

DISCLAIMER – Any financial information within this email has been compiled by First Choice Business Brokers to provide broad general information about business opportunities and the state of the market. First Choice Business Brokers makes no representations or warranties in relation to the financial information in this email. For purchasers looking to buy, we strongly recommend that you carry out your own investigation or consult a qualified accountant before making a purchase.

Copyright © 2018 by First Choice Business Brokers Pty Ltd. All rights reserved. No part of this publication may be reproduced in any form, by microfilm, xerography, electronically or otherwise, or incorporated into any information retrieval system, without the written permission of the copyright owner

Posted in Uncategorized on 21st August, 2018