The G-20 meeting of world leaders over the weekend was undoubtedly the biggest event that business people all over the world watch closely. Amongst the key points to watch for was obviously what happens between China and the US on their trade disputes. As the weekend concluded, good news came out. Markets were cheered by US President Donald Trump and Chinese President Xi Jinping agreeing to temporarily halt the imposition of new tariffs as they work towards negotiating a more permanent agreement.

As a result, almost immediately, Australian investors were buoyed by the news, despite it being a temporary suspension of trade hostilities, and pushed stocks sharply higher at the start of the week.

Monday’s session saw the S&P/ASX 200 index surge 87 points, or 1.5 per cent, to 5754 for its best percentage performance in around eighteen months. The Australian dollar jumped to US73.51¢ against the US dollar.

Australian Businesses stand to benefit enormously if relations between China and the US improves. 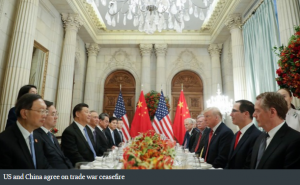 Posted in Uncategorized on 4th December, 2018