Australia’s wine exports climbed by 10 per cent to $2.82 billion wine in calendar 2018, with red wine varieties growing the fastest to now make up 76 per cent of the total.

The strong growth of the Penfolds and Wolf Blass brands owned by $11 billion ASX-listed Treasury Wine Estates into China helped push total exports into that country ahead by 18 per cent for the year to $1.14 billion, even though the pace of growth has been slowing in the past few months.

Australia has 2,543 wine companies exporting to various destinations, with growth experienced in seven of the top 10 export markets, figures released by industry body Wine Australia revealed. Red wine exports jumped by 12 per cent to $2.14 billion, while white wine was up by 12 per cent to $607 million.

Overall sales to the No.2 market of the United States went backwards by 5 per cent to $425 million but rose by 12 per cent to $389 million to the United Kingdom, the No.3 export destination.

Exports to Canada increased by 12 per cent to $210 million, and by 14 per cent to New Zealand, which bought $93 million worth of wine.

Apart from wines, many other Australian high-value-added agricultural produce have enjoyed stellar growth in recent years including cherries, mangos, native flowers and beef. The case for continued investments into Australian agriculture is expected to pick up pace in the coming years. At First Choice, we are well prepared to assist our clients riding the trend. 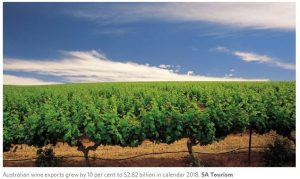 Posted in Uncategorized on 22nd January, 2019